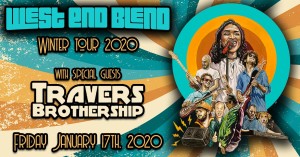 West End Blend returns to Flour City Station on 1/17 with Travers Brothership
1/2 price tickets —> https://flourcitystation.yapsody.com/event/index/517686/west-end-blend
$5 in advance // $10 DOS
doors at 8pm // show at 9pm
21+ only with valid id
—
West End Blend:
Since their conception, CT-based Funk/Soul band West End Blend has been playing their version of Funk and Soul in venues all over the Northeast and beyond. Fronted by vocalist Erica T. Bryan, the band pays homage to classic throwback sounds while adding their own distinct vibe and flair. Behind her, the Blend packs two guitars, a two-piece horn section, bass, keyboards and drums onto stages every night. From humble beginnings in an epic and sweaty basement dance party, The Blend’s goal has always been to bring that same atmosphere to their shows ever since.
West End Blend has shared the stage with Charles Bradley, Turkuaz, members of Snarky Puppy and Lettuce, Break Science, Kung Fu, Twiddle, Sister Sparrow & the Dirty Birds, The Nth Power, The Motet and countless others Jam/Funk staples. Their horns have also been featured as special guests with bands such as Dopapod, Pigeons Playing Ping Pong, Twiddle, TAUK and more. West End Blend has begun to take their dance party to cities around the US so be on the lookout for when The Blend comes to your town.
Travers Brothership:
Songwriters. Singers. Multi-instrumentalists. Brothers. At only 26, twins Eric Travers and Kyle Travers have been writing songs and stunning live audiences for well over half their lifetime. Presenting soulful, bluesy, rock n’ roll spun in psychedelic jam, Travers Brothership; also including singer, bassist, songwriter, Josh Clark, and keyboardist, songwriter, percussionist, Ian McIsaac, create a fierce and balanced team, strengthened by the 13 years they’ve spent together on and off the road.
The band first met in 2007 on a school bus in the Blue Ridge Mountains of Western North Carolina. Soon after the Travers twins were invited by Josh and Ian to get off at their bus stop for a jam in Josh’s garage, little did they know this was history in the making. After numerous jams and a few lessons from Eric and Kyle’s father (and veteran touring musician) “Hurricane” Bob Travers, Travers Brothership was formed in 2012.
With over 400+ shows across the United States and Europe under their belts, the band has become a well oiled machine, performing alongside acts such as; Gov’t Mule, Taj Mahal, J.J. Grey & Mofro, Moe., Kyle Hollingsworth Band, Blues Traveler, Charles Bradley, Leftover Salmon,The Marcus King Band, Dr. John, and many more.
Travers Brothership are consummate musicians and live music aficionados with a deep understanding of their preferred genres. Utilizing the band’s unmatched live energy, they create a concert atmosphere that transforms an audience into a community and their enthusiasm, gusto, and talents carry the day. In 2018 Travers Brothership brought their instrumental prowess and tasteful songwriting to Echo Mountain Recording Studios and The Eagle Room in their hometown of Asheville, NC. The result, “Let The World Decide” adds to their already abundant catalogue, and sets a new bar for the band musically.