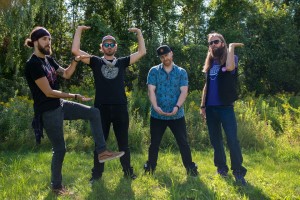 Strange Machines return to blow the roof off The Station with Ocular Panther starting the night off!!

Strange Machines
————————-
Boston-born, New England based quartet Strange Machines have been steadily making a name for themselves in the East Coast jam scene. A true melting pot of musical fusion, with sounds catering to rock, funk, reggae, jamtronica and a multitude of other genre’s, all while stringing them together seamlessly to create a fluid and captivating live performance. Their original songs are nuanced by creative composition, practiced precision, and a looseness that allows them to truly explore the music they create.

They have shared the stage with national-touring acts such as The Disco Biscuits, Twiddle, Dopapod, EOTO, The Motet, Pigeons Playing Ping Pong, Turkuaz, Kung Fu, TAUK, Deep Banana Blackout and more. Strange Machines have carved out their own niche in the east coast music scene and beyond and show no signs of slowing down.

Ocular Panther
———————
“Ocular Panther is bold; a brash and brilliant example of ethereal pursuit with organic tools. They have melded music from different genres, eras, and approaches to create a new contagion of danceable ambiance and rock grit. Some of the songs exhibit a protracted intro to their varied grooves that grow from a standard hook into a kind of epiphany. It smacks smooth and gloriously disjointed.”

“Ocular Panther’s sound doesn’t so much caress and cajole the listener as it stalks that listener like prey through a jungle that sounds like it erupted from the mind of Salvador Dali. Essentially dance music, the band’s sound employs electro grooves as if they were the obvious basis for a brand of outer-space funk. The music is sinewy and menacing. A blend of world beat, European electro, and a futuristic marriage of both laid the basis for the virtuosic interplay of the musicians, who managed to take what was essentially dance music into some deeply interesting places. Ocular Panther seems to have no trouble crafting music that moves with purpose and forward motion, avoiding the pitfalls of lazy static repetition. Which is to say, this is music that you can dance to, analyze, or simply lose yourself within with equal ease.”

The legend of the Ocular Panther is one of the most ancient and seldom told. Stories of the great beast can be found as far back as history has been written. These shape-shifter myths can be found all over the world from China to Iceland and Brazil to Haiti. They are said to be able to enter one’s being through eye contact, hypnotizing the mind and terrorizing the soul.